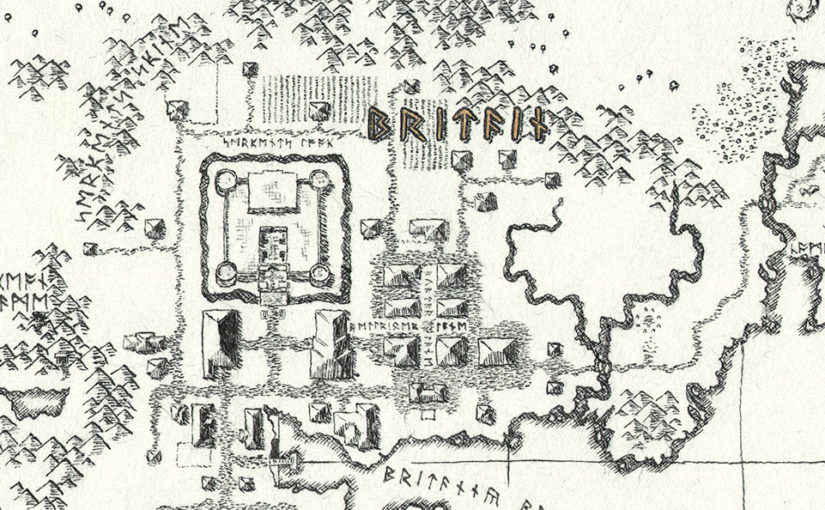 Ultima VI is one of my favorite games of all time. It was one of the first PC games I ever played. It was installed on my mom’s computer by my brother in law, and I stumbled on it by accident one day. I didn’t have any manuals or maps or anything, so I was going in blind. I think that kind of added to the appeal. I wound up drawing a map of my own on graph paper with quite a lot of detail using nothing but the in-game sextant and sailing around the coasts of every landmass.

More recently I thought it’d be nice to create a new map, something I wouldn’t mind hanging on my wall.

The goal was a map that looked like something that could plausibly have come out of the game world itself. If an explorer lived in Britannia and had sufficiently precise instruments, the resources, and a lot of patience they could have drawn something like this. So I wanted to avoid breaking the fourth wall as much as possible.

It also needed to be a practical game map. I should be able to play the game and find my way around pretty accurately. I don’t need to draw every tree, but I should be able to navigate around large impassible obstacles properly. So I didn’t want to go too overboard with stylizing how it was rendered.

I started by putting together a pixel map to base off of. I dug up some old Java code I wrote that can read most of the old game data files from Ultima 6. I altered it to use a different set of sprites I provided so I could render a more simplified version of the world map. This would make it more suitable for tracing from.

I brought that into Illustrator to add other design elements. Labeling all the towns, roads, and geographic features took several days, surprisingly. Placing labels in spots where they won’t obscure important details, where it’s clear what they’re labeling, and they don’t crowd other labels takes a lot of trial and error. I also added borders, gridlines, and roughed out some map monsters. It didn’t need to look precisely like the final product; this was all just to help with general layout.

I printed it out, taped it to a large sheet of transparent acrylic, then taped a sheet of mulberry paper over that, then placed the whole thing over a light table. I spent several weeks tracing all the details with a dip pen. A dip pen is kind of a terrifying thing, because it is so easy for the ink to blot and bleed and go where you don’t want it. The nib dries and won’t flow properly, so frequent cleaning is necessary. And that damn ink gets everywhere. Additionally, mulberry paper is a lousy medium for dip pens. It’s very fibrous, and the pointed nib tends to scratch at those fibers, loosening them and clogging up the works. A stray fiber can break the surface tension of the ink on the nib and let it flow onto the paper in globs. It was a mess. Don’t use a dip pen on mulberry paper. Or any paper if you can help it!

The hard work paid off though. I wound up with a result I was quite happy with. Enjoy some images!