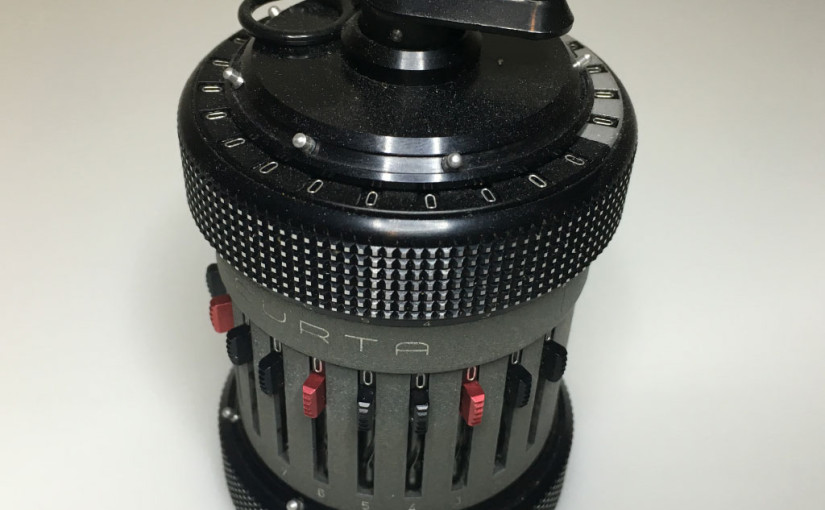 The Curta is an adding machine, primarily, with a mode for doing subtraction. Additional features allow addition to be compounded in such a way to achieve multiplication, and further advanced techniques can be used to divide and even compute square roots.

Around the outside of the cylindrical device are the input sliders. Here, the number 217 is set. The sliders click at each whole digit position, and a wheel above each one shows the digit that has been entered. The top of the device has two sets of registers and an input crank. The set of black digits is an accumulator. Each turn of the crank adds the number entered into the side sliders to this number. The set of white digits counts the number of cranks, adding 1 regardless of what the input number itself was (even if it’s 0). After one crank the input of 217 is added. That’s not a very efficient way of entering large operands, of course. That’s where the 10s ring comes in. The black top portion of the machine lifts up and rotates. In its “1” position, shown here, every crank adds the input number as-is.

But if it’s moved to its “2” position the input number is multiplied by 10 before being added to the accumulator.

When the crank is rotated once it adds 2,170 to the accumulator instead of just 217. The counter also reflects this change in input mode appropriately, adding 10 to the number of cranks instead of just 1. By pulling up the crank slightly we enter subtraction mode. Perhaps we made a mistake and meant to multiply 217 × 11, not by 12. We can simply subtract 1 by returning the tens ring to the first position, pulling up the handle, and doing one crank. We get the correct product in the accumulator of 2,387. The crank counter also shows the correct operand as 11. To clear out the top registers, there is a reset ring that swings out. By lifting the top of the device slightly and doing a full rotation all the digits are set to 0 and a new calculation can be done. There is a lot more to the device, but those are the basics.

One thing that I found interesting as I learned to use the device was how, unlike modern computer aided mathematics, this device does not excuse you from knowing how to compute things. It simply makes it faster and less error prone. Division, for example, is done through a process of successive subtraction that is rather labor intensive. It is not a matter of just entering in the two numbers and getting a result. It is much more analogous to a mechanically aided long division problem, continually subtracting multiples of the denominator until you have to move to the next 10s place. Computing square roots is even more laborious and I’ve only done it on two occasions just to get a feel for the process.

While that may make our modern brains ache to even contemplate, there is something connected and beautiful about it. It’s the difference between buying some frozen vegetables yourself versus harvesting them from your own garden. I don’t necessarily advocate that we all go back to using slide rules, but it is interesting to understand where we came from. We made it into space before pocket electronic calculators or CAD software or CNC milling machines, which may seem unthinkable today. I find it empowering to realize that such complex concepts are still something one can do by hand if needed.

If you’re curious to learn more about the Curta, there is a pretty enthusiastic fan community out there of engineers and collectors.

For a good high-level overview of the device, watch this Numberphile video.

For a deeper dive into the mechanics inside the Curta, check out this incredible video that does a complete computer animated teardown of the device, showing how every mechanism works.